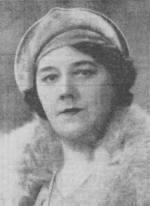 THERE are some questions that cannot be answered by either an unqualified negative or an unqualified affirmative, and the question, “Does Marriage Handicap, a Woman’s Ambition,” is one of these.

It depends upon the marriage, the woman, and the strength of her ambition.

It will, however, be generally conceded, that marriage brings to the average woman problems so manifold, so obvious, and so urgent that the general tendency is to crowd out more personal and less tangible impulses, through the sheer lack of energy and time.

Therefore, if a woman’s ambition is a mere “desire” to attain it may readily be thwarted, not alone by marriage, but also by the obstacles which life normally puts in the way of the woman who seeks to achieve.

But if her ambition be desire — “plus,” the power of the “plus” — the will of the spirit — will transform her ambition into a radio-active force, which must surmount all obstacles to its expression.

There are, of course, unions, misnamed marriages, when the light of reason is obscured, and there is no room for the sunlight of liberty.

In such cases the woman invariably yields her personal ambition, her greatest urge being to advance the ambition of her consort, and, through him, those of her home and family.

But even this cannot be said to be a frustration of her ambitious hopes.

Indeed, it may be regarded as a sublimation, through marriage, of her individual ambition, into perhaps a higher form of that attribute — the advancement of the interests of the family, the group that comprises her world.

Therefore, while it is admitted that life itself, rather than marriage, presents problems to the married that tend to the modification, in a great many cases, of a woman’s personal ambition. And that woman herself tends to concede the lesser for the greater when she becomes the inspirer of her family. It must also be recorded that the highest type of marriage, based as it must be upon the recognition of the isolation of the soul of each, and the right of the psychic [sic] to the fullest unfoldment and expression, not only does not handicap a woman’s ambition, but also inspires it, and gives it wings upon which to soar.

The world owes much to the ambitions and achievements of unmarried women, many of whom have sublimated their inherited maternal instincts into a material social force of tremendous value.

One need only cite Florence Nightingale, Frances Willard, the Brontes, and Susan B. Anthony for convincing evidence on this point.

And one may ask who can calculate the debt the world owes to those millions of women to whom marriage itself was an ambition, a career, and successful motherhood a profession.

Then there are those to whom marriage seems to bring a flowering of the capacities, an irresistible impetus for expression, which conclusively proves, at least in the cases concerned, that marriage is not a handicap to an ambition which is something more than really a pale, weak aspiration to achieve distinction.

Therefore the position may be fairly summed up thus: —

Marriage to many is a handicap to ambitions, but it depends upon the marriage, the woman, and her ambitions.

Marriage, to many, is the very matrix of their inspiration; but again, it depends upon the marriage, the woman, and the ambition.

Unmarried women have put the world in their debt. So equally have the married.

In greatness there is neither first nor last.

The failure, if we are handicapped in the expression of our ambitions, lies not so much in marriage as in ourselves.