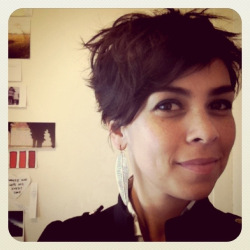 I first heard Eleanor Jackson perform at the launch of Michelle Dicinoski’s Ghost Wife at Avid Reader bookshop in Brisbane, where I was  mesmerised by her lyrical and powerful poetry.  As someone for whom, as she writes in her post below, visibility and performance are major – but ofted vexed – considerations, I was delighted when she agreed to be one of our guest writers for our focus on lesbian and queer women writers this month. Eleanor is a Filipino Australian poet, performer, arts producer and radio broadcaster.  She is also the Poetry Editor for the online magazine, Peril Magazine, which considers and promotes Asian-Australia creative culture.  In her performance of Your Poem is Better than Mine, her line ‘The best thing about your poem is it does not tell me what to think’ could be seen as an expression of how every individual – lesbian, queer, straight, black, white, disabled and so forth – has a voice which can be heard on its own terms and which should not be corralled into a category.  Eleanor’s work is about busting these categories by compelling her audiences to think about the assumptions and stereotypes attached to them.  If, as she writes, ‘we can make “other” people, gay people, ethnic people, less unfamiliar, then perhaps we will recognise their intrinsic humanity more easily.’

Don’t forget that we have a book giveaway of Michelle Dicinoski’s Ghost Wife and Yvette Walker’s Letters to the End of Love for those who read and review a book by a lesbian/queer women writer this month.  If you’re stuck for suggestions, check out our list of lesbian and queer women writers.

As a bisexual, biracial woman, I am very aware of the heady intoxication of sometimes passing as either “heterosexual” or as “white”. The cache of privilege that is afforded to me when someone says, “oh, but you don’t look gay”, or “well, yes, but you’re not very Asian”. The strangely insulting realisation that they actually mean those phrases to be compliments.

Rightly or wrongly, I also am aware that, if I chose to, I can censor parts of my identity that will make me more socially acceptable to mainstream members of Australian society. I can sit in a group of work colleagues and no one will feel forced to say, “oops, I meant ‘gay’ in a stupid way, not in a gay gay way”, and often, unless I bring it up, I can avoid the “no, where are you really from?” questions that irritate so many of my friends whose ethnic heritage is more visible.

For a long time, both as a person and as a spoken word performer and poet, I thought that was a good thing. Equally, I often used to feel that the terms themselves were silly, that everyone had a sexuality and an ethnicity, so, why should my experiences be more anomalous, more required to qualify my writing? I mean, writing’s writing, right?

You see, almost every time I share my writing, I am present to that act of sharing. Naturally, I write a lot alone in my room and press print, or upload or whatever I do, and that act is seemingly neutral, distanced from my physical person. Yet, over time as I began to perform more often, to bigger or wider audiences, as things went theoretically “better” from a writing point of view, the more I became aware just how gendered my experiences as a performance poet were.

Particularly in a competitive, poetry slam environment, my softer feminine voice never seemed as authoritative; sometimes I was the only woman on a bill; sometimes I felt shouted down by louder, typically, male voices; and even I wasn’t naïve enough to ignore that audiences (both men and women) preferred work that was less political, less ranty, less mouthy from women. Perhaps most distressing for me personally, was that I still felt acutely aware of that my attractiveness (or otherwise) as a woman could, in fact, be a key determinant of whether or not people thought the writing was good.

You see, I’d sat in audiences that ignored older female writers waiting for the bombast of a younger man, that whispered unkind things about female writers that were just “going on a bit”, or expressed outright disgust at an older woman’s reflections on sexuality – even as they indulged a rogueish “silver fox” recollecting his past glory days or winking cheekily at a younger woman. As a performance writer, I am aware that what I look like, as a woman, as a queer woman, as a woman of colour (light-skinned or otherwise) says something to an audience that I cannot always control, let alone neutralise.  That my identity is a part of the writing and its performance, in the way that we are all distilled somehow into our writing and our work, even as we may hope to achieve the exact opposite.

In an increasingly media-saturated and televisual world, the awareness that what women look like still matters, is no less important for print-focused female authors as it is for performance-based writers like me. Agents and publishers are aware that even very good writing will need very good PR and very good PR for women will often require that we trade in the cultural expectations we place upon women. No matter where you sit on the political spectrum, the recent experiences of our first female PM reflect once again that Australian culture is no fan of intelligent, powerful, forthright women. Although Penny Wong’s clear, no-nonsense appreciation of “her family’s worth” gives me some hope that the conversation is genuinely changing.

As a bisexual, biracial female writer, I take a very queer approach to how I personally address that in my arts practice, by persisting in taking up space – a kind of regular and repeated coming out as a writer. In doing so – as a physical woman with a sexuality and an ethnicity and a set of lived experiences that are (I must add, not necessarily more interesting or more worthy than anyone else’s), I feel that I have a small chance of giving evidence to my perspective and experience as a person, which is the only experience that I am at all expert in.

In turn, I hope to contribute to erasing the kind of shame that has been appended to those categories, if only because it draws into question the assumptions we all make about what is good, what is normal, what is acceptable, and what is valuable – if we can make “other” people, gay people, ethnic people, less unfamiliar, then perhaps we will recognise their intrinsic humanity more easily.