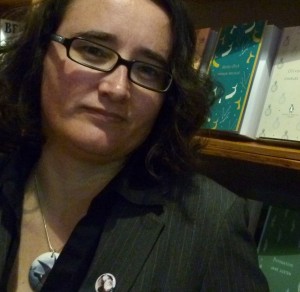 As part of our focus on queer and lesbian women writers this month, some wonderful authors are writing guest posts for us.  Last week, Michelle Dicinoski, author of the memoir Ghost Wife, wrote on identity and shadows, while this week’s writer is Yvette Walker.  Yvette is the author of the exquisite  Letters to the End of Love, a novel of letters between three couples whose histories brush lightly against one another.  Last year it was reviewed for the AWW Challenge by Elimy, Amanda Curtin, Annabel Smith, Jennifer Cameron-Smith, and myself. In her post, Yvette notes how ‘Queer people align themselves with the magical, the mysterious, the fey and the glamorous because we are conjurors at heart, vaudeville magicians’, and such transmutation has been necessary for their survival.  She also muses on the importance of literary mentors who pave a path for queer and lesbian writers to walk upon, while adding their own flagstones as they go.

We also have a book giveaway of Michelle’s Ghost Wife and Yvette’s Letters to the End of Love for those who read and review a book by a lesbian/queer women writer this month.  Simply link your review as you would normally do, and I’ll go through our spreadsheet and write a wrap up of these reviews on the 1st March, then pick two names from a hat!  If you need ideas for authors to read, check out our list of Lesbian and Queer Women Writers.

One Art: Elizabeth Bishop and E.M.Forster

As a writer you sit in a room for three to five, even eight to ten years, and you wrestle with words. You are always alone, always reworking, revising, revisiting the same places over and over again until the words sound, not so much exactly right, perhaps its more that you get them to the point where they aren’t plain wrong. In the end, you learn to live down the street from perfection. Except if you happen to be Elizabeth Bishop. Bishop’s reputation as one of the twentieth century’s greatest poets rests on perhaps seventy poems, yet she is mentioned in the same breath as Eliot, Yeats, Auden and Wallace Stevens. [1] John Ashbery called her “the writer’s writer’s writer.” [2] I have read Bishop all my adult life and I will never finish reading her. I have been to the waiting room in Worcester, Massachusetts, I have visited the dirty Filling Station, I have seen the moose of the New Brunswick woods, I have disembarked at Santos, in the state of São Paulo, Brazil, I have caught a fish and let a fish go. Her poems exhibit a perfect concordance between the ordinary objects of the world and their inherent beauty. I don’t remember when I found out that she was queer. This fact is not obvious in her work, which I suppose is both characteristic of her personality and the times in which she lived. She did not mine her own life for her art – I believe that idea would have been an anathema to her. She was, I gather from the brief biographies I have read, a difficult woman – an alcoholic, a binge drinker – unfaithful to her lovers; but also extremely charismatic.

The great love of her life was the architect Lota Costallat de Macedo Soares. The two women spent fifteen years together in Brazil, living in a house which Lota designed, “a glass and steel modernist house on top of a distant, isolated hill with a beetling granite cliff at its back.” [3] It was during these years that Bishop wrote many of her greatest poems. It’s impossible not to romanticise the scene – a great love affair, two brilliant artists, one reclusive and shy, the other dynamic and arrogant. Bishop had a happiness with Lota that was hard won, but in the end it did not last. I now refer you, like all undergraduate teachers of Bishop would do, to her poem entitled One Art – read it and you’ll understand what I mean [4]. Bishop has steered my course all these years, both as a human being and as a writer, and somewhere, in my heart of hearts, I am a little bit pleased that she is queer like me, in fact if I am brutally honest I am elated, as meetings such as these are difficult to come by. There is great difficulty in being a queer writer – it’s hard to explain, but I will try. It has to do with closets, I think, and halls of mirrors, and invisibility. Queer people align themselves with the magical, the mysterious, the fey and the glamorous because we are conjurors at heart, vaudeville magicians – we have had to be in order to survive the numerous and varied punishments metered out to us over the centuries. We appear. We disappear. We are in. We are out. Our history (such as it is) has mostly been made on the run, written in code, whispered from one generation to another. So how to write about being queer? What to do? Well, you seek out who and what you can. You ask, who am I, and somewhere, someone will answer you back. For me, that person was Elizabeth Bishop, when I was young and being queer was difficult, almost impossible. Later, much later, when I was casting about and writing Letters to the End of Love, I rediscovered E.M. Forster. Not the Merchant Ivory Forster, but the queer Edwardian, the observant outsider, the gentleman rebel who had to wait until after his death to come out. Forster’s novel Maurice was written in 1914 but not published until 1971. It is considered to be the first modern gay novel. Inspired by the life of the socialist philosopher Edward Carpenter and his lover George Merrill, and a model for D.H. Lawrence’s Lady Chatterley’s Lover, Maurice is not only a celebration of homosexual desire, but it is perhaps the first (and one of the most beautiful) articulations of gay marriage. To quote Forster: “I was determined that in fiction anyway two men should fall in love and remain in it for the ever and ever that fiction allows….”[5] I read Maurice late one night at Varuna, Australia’s National Writer’s Centre, the former home of the writer Eleanor Dark. I had borrowed the house library’s copy of Maurice, the signature ‘E. Dark’ there on the flyleaf. I read the book in one sitting and when I finished, it was as if a door had been flung open. Here was a novel that spoke of the spirituality of homosexuality, its mystical and romantic elements, here was a writer who believed in the idea of a lasting monogamous gay love. Here was a writer who had written great love stories, both straight and gay, whose empathy stretched across boundaries of class, race, sexuality and gender. Empathy for the outsider is a major theme of all of Forster’s books; from his first novel Where Angels Fear to Tread, to his final work, A Passage to India. The couples which roam about in Forster’s novels – Helen Schlegel and Leonard Bast, Lucy Honeychurch and George Emerson, Maurice Hall and Alec Scudder – they are all odd couples, strange couples, all queer in their own way. If Elizabeth Bishop showed me how discipline can uncover great beauty in the most ordinary things, Forster showed me how people relate, how they love, how they grieve, how they lose and find themselves. Letters to the End of Love is influenced by the work of many writers but I keep Bishop and Forster very, very close to my heart, and even closer to my writing desk. Their writing remains a map towards my own.