“As Nature Bade Her”: Sensuality in Tasma’s Bush Stories 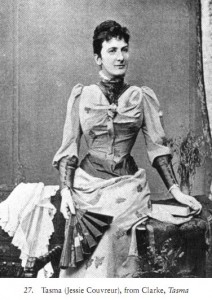 Tasma, a little-known literary gem of colonial Australia, was the pseudonym of Jessie Catherine Huybers, later Mrs Charles Fraser, and afterwards Mrs Auguste Couvreur. As her collection of names suggest, Tasma lived an extraordinarily unconventional life as she travelled through Australia and Europe working tirelessly to support her family. Her experiences with financial hardship, familial discord and disappointing relationships found acute expression in her journals and fiction. Of course, her most popular novel remains Uncle Piper of Pipers Hill [1889], first serialised in the Australasian and for which “fame came to the writer in a single week” (“‘Tasma’ at Home”, The Mercury Wednesday 17 August 1892: 4). Tasma was born in London, the second child to Alfred and Charlotte Huybers, in 1848. When she was four years old, the small family migrated to Van Diemen’s Land (now Tasmania). On this small island, the Huybers family grew in both size and wealth, and Tasma was succeeded by six siblings. Her childhood was thus invested in delightful expeditions and games; as well as in teaching and nurturing her younger siblings. Nevertheless, this simple and happy childhood was not destined to last. Alfred and Charlotte separated early in Tasma’s life; and, when only nineteen years old, Tasma disregarded her mother’s many warnings and married Charles Fraser in 1867. This marriage proved a death knell for the bright-eyed girl and, before long, Tasma and Fraser were separated as well.

Hope was, momentarily, rekindled in Tasma’s life when Charlotte planned a trip to Europe with all her children. It was there that Tasma, still under the name of Mrs Fraser, was able to exercise some of the new freedoms she dreamed of: living among artists and writers in the Latin Quarters of Paris and touring Europe. Most notably Tasma gained oratory fame by lecturing throughout Europe on Australia—the land, its people and its Antipodean aspirations. Publicly, she moved among the higher echelons of society, increasing her knowledge and her repertoire with parallel vivacity—though not her finances.

Privately, Tasma continuously lamented the ‘ball and chain’ of marriage and womanhood. A diary entry dated 20 April 1890, gives us an indication of some of the sacrifices Tasma made as a result of social values placed on a woman’s marital status. While her estranged husband, Fraser, carelessly entered upon a de facto relationship with the couple’s former housemaid, Tasma recounts;

I was in the tram, when in came the Commandant—to whom I have not spoken or hardly seen…for fifteen years—that is to say from our dramatic parting from one another forever…I had some ado to refrain from showing my emotion, turning from white to crimson and from crimson to white in the space of a few seconds…[but] a moment later found myself answering a string of questions that he managed to ask me all in a few seconds. Is your first husband dead? …What? Divorced? And you didn’t want it –no—you didn’t want it—at the time…You remember? And you have children? No? …Are we the same people I wonder? Or have our minds and hearts undergone the same transformation as our bodies? (Tasma, 1995: 69-70).

There is little evidence to explain why Tasma, who was finally able to relish in the independence of divorce, remarried in 1885 to Auguste Couvreur. Yes, he was far more compatible with her intellectual pursuits: Auguste was a Belgian political correspondent, a socialite to royalty, and a man who was very much concerned with the plight of woman’s liberation—which must have appealed to Tasma’s radical ideas. Still, there is little to suggest that they lived ‘happily ever after’. Couvreur did not bequeath any of his estate or savings to his wife at his death, leaving her to struggle financially once again until her own death in 1897. Altogether, Tasma’s fiction is as vibrant as her life. Her anthology, A Sydney Sovereign (1889), is a vivid assortment of romances; humorous, sometimes tragic, anecdotes; and, parables designed to captivate readers with clever human portraits and sublime depictions of Australia. There is a ‘beauty and the beast’ –type fairy-tale on a burning ship; an Australian philanthropist who unsuccessfully attempts to rehabilitate a Parisian prostitute; a gaol-warden who falls in love with his convict housemaid; a detailed description of a young girls’ sexual awakening; and tortured artists and models falling in love. Yet, in three of her short stories— “Monsieur Caloche”, “How a Claim Was Nearly Jumped in Gum-Tree Gully” and “The Rubria Ghost”—Tasma also explores the impact of the bush environment to the Australian women she conjures.

Monsieur Caloche is thin, graceful and timid. Stranger still, he is a French homme de lettres, seeking work in colonial Victoria. His “vivacious dark eyes, shining out of his swallow face, scarred and seamed by the marks of small-pox,” meet the “inquisitive gaze” of those clerks working for the truculent Sir Matthew Bogg “with an expression that seemed to plead for leniency” (95). Evidence of a life of suffering line Monsieur Caloche’s face; yet, wherever he goes, his workmates are driven by an invisible force to treat him with compassion—it drives Sir Matthew particularly mad. Indeed, what no one seems to realise is that Monsieur Caloche is a woman. The tale seeks, on one hand, to answer the morose question: what is left to a woman when her beauty, and thus marriageability and financial security, is disfigured? “For, with one exception” Caloche’s diary was, “filled with French quotations […] all pointing to the one conclusion […] that a woman who loses her beauty loses her all” (114). On the other hand, it allows a woman to infiltrate the “oppressive calm” of the bush environment, only because she is dressed as man (113). When Sir Matthew violently strikes Monsieur Caloche at the station, the latter can only think to “run sobbing” through the unforgiving bush, thus relinquishing any hope of comfort in a world of vanity (112). When finally discovered, Caloche is undressed and “Bared, without any protest” by Sir Matthew and the station manager, Blunt, to reveal “A virgin breast, spotless in hue”—the body of a dead woman (114).

In “How a Claim was Nearly Jumped in Gum-tree Gully”, Dave and Dave’s Mate work tirelessly for ten years to build a suitable bush home for Tilly, Dave’s lover. Only when their joint task is complete is Tilly finally able to marry Dave and accompany him to the homestead, where the trio are incandescently happy, both men believing they have a claim on her. Interestingly, though Dave and Dave’s Mate had been working hard and familiarising themselves with the gully for over a decade, “they had never been alive to the beauties of the bush track” before Tilly made them aware of it on the journey home (54). As Tilly is introduced, nature is alive with splendid blue, slate and mauve colours that accentuate the dynamic visual splendour of the region; and the olfactory senses are awakened by the “aromatic odour of gums and peppermints blown into their faces” (54). Additionally, Jillian Heydt-Stevenson (2007), a scholar of material culture, explains that bonnets in nineteenth-century literature are eroticised and the lack of a hat represents a female character’s (social) sexual vulnerability. (Heydt-Stevenson, 2007: 54). So, when Tilly “pushed back her brown hat to remark upon that funny colour of the range of hills ahead of them” on the journey home, what is euphemistically described is her licentious sexuality that permits the trio to live as a “trinity in unity” before Dave’s Mate removes himself from the station and his tempting desire for Tilly (54).

Finally, in “The Rubria Ghost” the uneasy atmosphere of the Rubria station is weighed down by, “the presence of unwholesome old age” (28). The domineering and decrepit station-owner, Jason, suffocates his child-bride Emily. Since he is hampered by his own feeble body and cannot keep up with his wife’s youth and vitality, whenever, “she step[s] beyond an imaginary boundary that he ha[s] feebly conceived as her limit,” his languid croak calls out, “‘Em-my, Mrs Ja-son, wi-fe, come!’” at which cries, Emily promptly returns to her doddering husband’s side (28). One evening, however, desperation and despair at Jason’s fondling force her to flee from his side and escape, “as far as her loathsome office allowed” to the safety of the ethereal bower in the garden (28). It is, however, in the bower of peppermint scented Murray pines that Emily falls straight into her lovers’ arms, the Rubria ghost, Tom. While she weeps over her contemptible marriage, Tom kisses and consoles Mrs Jason and promises her a new freedom if she can find the courage to leave her husband, to which Emily ultimately agrees. The narrator makes no apologies for the immoral story, or for its supernatural qualities. Instead it praises the spatial and imaginary capacity of the bush to unfetter women from their questionable social obligations, though very clearly at the cost of Emily’s reputation.

It is clear that in all three of Tasma’s short bush stories, the female characters act “as Nature bade her”, though their performances are overtly problematic (31). This reflects the problematic concept of women’s relationship to the bush and bush men in colonial Australia. As Kay Schaffer (1988) writes, “When women inhabit the bush in the histories and fictional accounts” of the period, “it is seldom in their own right” (Schaffer, 1988: 62). Instead they appear only in relation to the men in the stories—in this case, as a ‘spoilt’, unmarriageable woman, ‘discovered’ without her consent; or as wanton wives, both seducing and seduced. In short, the sexualised objects of men’s desires. Together, these bush stories reflect Tasma’s problematic relationship with her first husband, Fraser and thus Australian country life. They also reflect how, in Tasma’s experience, ‘freedom’ for women always incurred a bitter personal or social sacrifice. Far from condoning such views, Tasma’s short stories and novels continuously try to break through these masculinist concepts like waves trying to break through the impenetrable sand. The success of her efforts can only be determined today by the readers who actively seek out her work, and who, in doing so, reinstate Tasma in Australia’s literary imaginary. Indeed, she should not have been forgotten in the first place.

A Sydney Sovereign and Other Tales (1889)

Caird, Mona. 2010. The Morality of Marriage and Other Essays on the Status and Destiny of Woman. Cambridge, UK: Cambridge University Press.

Tasma. 1993. “How a Claim Was Nearly Jumped in Gum-Tree Gully”, “Monsieur Caloche” and “The Rubria Ghost”. In, A Sydney Sovereign and Other Tales edited by Michael Ackland. Pymble, NSW: Angus and Robertson. Narelle is a doctoral candidate at Western Sydney University in the Writing and Society Research Centre. Her current research explores the relationship between space, gender and identity in the works of Tasma, Rosa Praed and Ada Cambridge.