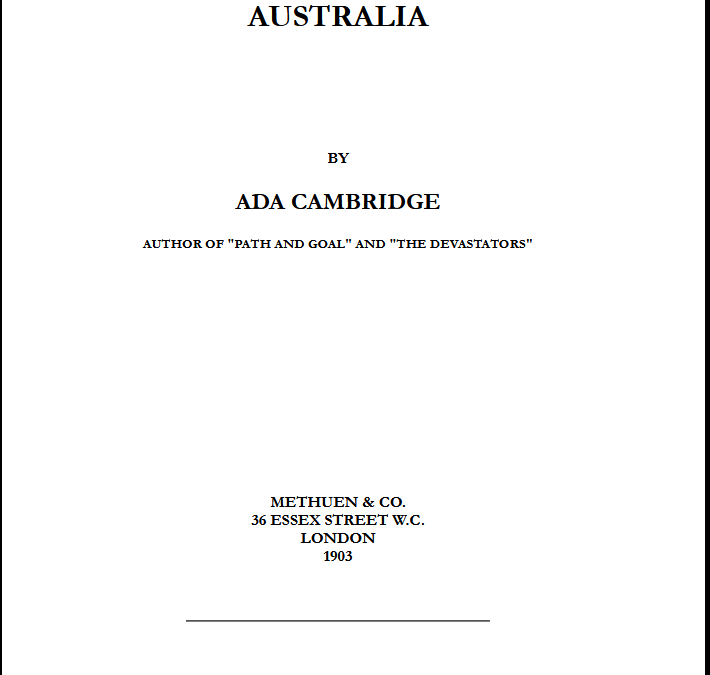 Ada Cambridge (1844-1926) was one of Australia’s most successful novelists from the 1870s up to the turn of the century. Thirty Years in Australia (1903) is her memoir of those years.

Ada Cambridge was the daughter of a gentleman farmer in a northern English county. At age 26 she met G the curate of nearby CofE parish while visiting the poor.

I knew nothing whatever of Australia when I rashly consented to marry a young man who had irrevocably bound himself to go and live there, and, moreover, to go within three months of the day on which the wild idea occurred to me. During the seven weeks or thereabouts of a bewildering engagement, the while I got together my modest trousseau, we hunted for information in local libraries, and from more or less instructed friends. The books were mostly old ones, the tales the same. Geoffrey Hamlyn was my sheet anchor, …, cannibal blacks and convict bushrangers appeared to be grim facts.

G, and that is how he is referred to throughout, was George Cross, whom I can only imagine was as upper middle class as she was herself. Certainly they always had one servant and generally two or three.

After a few weeks honeymoon within walking distance of home (4 miles) they departed first for London then Plymouth, where they embarked on the sailing ship Hampshire, and after a stormy passage of 77 days arrived in Melbourne, then at the height of its post goldrush glory, on 18 Aug. 1870. 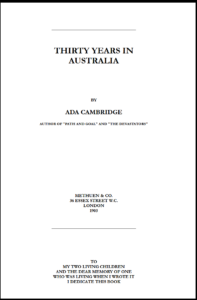 That is almost the last place name we will see. All of the parishes to which Cross is appointed are given only their first initial, to protect the identities of the people described, I suppose. But as three of those parishes started with B, and they are all readily available online (and, I read, in a later version of this memoir) I will give the names in full.

The memoir is divided into 20 chapters. Seven of those are places they lived, eight counting England, and the remainder are journeys or topics – a friend, the great property boom, her dog, the ‘Great Strike’ – she thinks worthy of a chapter of their own.

The book is meant to be read by people who “know” Cambridge as an author, but she says very little about her writing, let alone about people and incidents who might have inspired a particular work. Of her fellows she mentions only Tasma, who was married to a merchant at Kyneton, 50 km north east of Melbourne in 1867, but was living in Belgium by the time Uncle Piper of Pipers Hill was published in 1889.

Melbourne, Ballarat and Bendigo were substantial cities by the time the Cross’s arrived in Victoria, but much of the rest of the country was in the early stages of development, with the old squatters runs just starting to be divided up into settlement blocks. Cambridge waxes lyrical about the old homesteads, and the hospitality she encountered there. I wrote in my review of A Mere Chance that she may have based her descriptions of ‘Adelonga’ on the stations she knew (and lived on) around Coleraine, but in fact from her arrival in Victoria she mixed with the squatter class wherever she lived, and had plenty of friends to stay with, up to the Governor’s wife, of the same class in Melbourne.

It is important to understand that whereas ‘gentleman farmers’ and rich merchants were a level below the upper class in England, in Australia they were (and are) the upper class. Government House and visiting lords were a rarity, popstars.

Cross’s first position was as a curate in Wangaratta, but the Sydney road (now the Hume Highway) was in such poor condition at the end of winter that they caught the train to Echuca (the new Sydney line was still a few years in the future), a paddle steamer up the Murray, and then a farmer’s cart across country from somewhere near present-day Yarrawonga.

Cambridge’s first impression of ordinary Australians was their sturdy independence:

And as for the cottage people—the marked thing about them was that they were not “the poor.” There was none with whom a clergyman or his wife could safely take the liberties so customary at home.

Of the original Australians, she is less complimentary –

What alarmed me much more, though with less cause, than snakes were the blacks, which at that time wandered into one’s life as they never did afterwards. Some remnants of the river tribes remained about their old haunts, apparently in their old state of independence. I had seen them from the deck of the steamer, squatting on the banks in their ‘possum skins, or fishing naked from a boat that was simply a sheet of bark as torn from the tree; in W—— they trailed about the streets in some of the garments of civilisation, grinning amiably at the white residents, on the look-out for any trifles of tobacco or coppers that a kindly eye might give hope of. They are hideous creatures, poor things, and their attempts at European costume did not improve their appearance.

After leaving W—— I saw little more of these disinherited ones, until many years later a few visited us in the Western District. These were refugees or escapees from a neighbouring Mission Settlement [most likely Condah]. Theirs was a tale of tyranny and injustice to melt a heart of stone.

The following year Cross had his own parish, further east, at Yackandandah, from whence he would ride out on enormous excursions into the upper reaches of the Murray. It was there, in 1873, that Cambridge began writing stories for the Australasian “not because I found any fascination in such work to dispute the claims of the house and family, but to add something to the family resources when they threatened to give out.”

Their time at Yackandandah coincides with the early years of Ned Kelly’s career as a bushranger. But their next few parishes were in western Victoria and by the time Cross was posted to nearby Beechworth Kelly had been arrested at Glenrowan and hanged. Cambridge does not seem aware of the Kelly Gang when discussing Cross’s lonely excursions, and only mentions Ned once or twice in passing.

I don’t think it is so clear in her novels as it is in her memoir how much Ada Cambridge is of her class. At Wangaratta, she encountered Chinese market gardeners

Poor John Chinaman! so industrious, so frugal, so inoffensive and law-abiding—an example to the white citizen of his class—if ever I feel ashamed of Australia it is on his account. Its treatment of him, who seems to have no friend amongst the nations, is indeed a strange satire upon the traditions of the British race. One can see a certain reasonableness in the poll tax of £50, hard as it seems that one only of the various aliens amongst us should be thus penalised (and for his industry too); it is, doubtless, advisable that we should prevent ourselves from being over-run (seeing that the earth is not for all) …

The chapter on the ‘Great Strike’ begins well –

… the money I had set aside I sent to the funds of the great Dock Strike in England, which was going on at that time. I mention this fact so that the poor working man and his friends may not gather from any remarks I may make on the subject of Australian labour conditions the mistaken idea that I am out of sympathy with his cause. The contrary has ever been the case, and I hope always will be; as a worker myself, I feel beyond measure for those who are unfairly hampered in what is so stern a struggle at the best. It has been the religion of my youth—poorly practised, I confess—to stand by the down-trodden as against those who in their prosperity walk over them; but ..

That ‘but’ goes on for a whole chapter of examples of the idle unemployed who refuse to work. The London dock strike was 1889, but I think the ‘Great Strike’ of her chapter heading is the Queensland shearers strike of 1891.

After two years at Yackandandah came Ballan (1874), Coleraine (1877), Bendigo (1884) Beechworth (1885), and finally in 1893, Williamstown, looking across Hobsons Bay to Port Melbourne. During this time I think she may have had five children, only two of whom survivied. This memoir was written in 1903, by which time Cambridge had published 20-odd novels, many as serials in newspapers, two short story collections and five books of poetry.

Cambridge subsequently published five more novels, including Sisters (1904) which is probably my favourite. A reader of an earlier review wrote and told me that Mrs Aeneas Gunn stayed with the Cross’s in Williamstown while she was writing We of the Never Never (1908). I’m sure Ada Cambridge, moving quite freely in Melbourne society, met many writers, but sadly she doesn’t say so.

The author makes no secret of the fact she was homesick the whole time, only their finances preventing them from taking at least a holiday ‘back home’. Cross retired in 1909 and in 1912 they did finally return to England, where he died in 1917. Cambridge “returned to Australia later that year, and died in Melbourne on 19 July 1926. She was survived by a daughter and a son, Dr K. Stuart Cross” (Wiki).