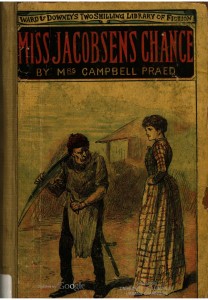 Who knew there were so many classic and forgotten books by Australian women available online?

This year we’ve decided to have a “classics” push on the AWW blog and soon we’ll be posting a classics Bingo card which will ask people to read books from various decades from the late 19th century on. With that in mind, I’ve been busy compiling a list of books by Australian women which can be either read online or downloaded in various formats, starting in the 1840s and ending in 1940. (Beyond that, they tend to be still in copyright.)

I’ve used a variety of sources to find the texts including the (amazing!) Colonial Australian Popular Fiction: A Digital Archive, a list compiled for an exhibition on Australian Women’s Writing at Monash (pdf here), a list of 19th-century Australian books compiled by Katherine Bode of the ANU (excel spreadsheet here), the AustLit database, TROVE, Project Gutenberg and Gutenberg Australia, the University of Sydney Australian Digital Collections, HathiTrust and Archive.org.

You can either scroll through to the entire list of books here, or by decade. Be warned: there are so many more than I expected.

With such a choice of books, it’s going to be a challenge to decide what to read.

I’m particularly keen to see whether books identified as “popular fiction” stand the test of time, but there are plenty of literary books as well. “Romance” appears to be more numerous than other genres such as “crime”, but whether these are “romances”, as we’ve come to understand the term, or simply entertaining fiction, remains to be seen.

In an effort to balance out the genres, I’ve included links to some mystery stories which were serialised in newspapers and subsequently digitised on TROVE. Unfortunately, much of the text is badly corrupted and will need comprehensive editing before being useful to readers, but maybe some enterprising person will be inspired to do a spot of editing. (If we all did a little bit, it’d get done eventually. It can be addictive – trust me, I know!)

Already some members of the AWW Facebook group have expressed an interest in one of the books I’ve found, Miss Jacobsen’s chance: a story of Australian life by Rosa Praed, published in 1886. Isn’t the cover wonderful? Looking forward to hearing what you decide to read.

About me: I’m an unapologetic fan of popular fiction, having exhausted my literary tastes with a degree that involved reading English Literature from the Anglo-saxon times to the present day. I’m slowly getting back a taste for more demanding books, but I still love a good page-turner. Through my involvement with the Australian women writers challenge, I’ve discovered a new love for historical fiction. Regarding my own writing, I’ve had two novels published, one a rural romance, Snowy River Man, and the other a romantic suspense, By Her Side, both under the name, Lizzy Chandler. Once I’ve finished helping my 93-year-old aunt write her memoirs, I’m hoping to write a story loosely based on my family history. I’m behind the @auswomenwriters account on Twitter and also administer the AWW Facebook page.